In fact, the most exciting thing Samsung is about to launch isn’t even the Galaxy Note 9.

It was just a few days ago that we saw Samsung’s leaked promo clip for the Galaxy Note 9. In it, Samsung highlighted various features of the phone, including the fact that it’ll offer users 1TB of local storage. With one video Samsung confirmed the rumors that said a 512GB Galaxy Note 9 does exist and will launch soon, but also that it’ll support microSD expansion of up to 512GB.

Now, 512GB microSD cards already exist, but you know who’s not making them? That’s right, Samsung. The company, who knows a thing or two about manufacturing storage solutions of all kinds, including hard drives, SSDs, and flash storage for phones, will surely announce its first 512GB microSD card tomorrow. And that card was already featured in the video clip just mentioned.

Here it is again: 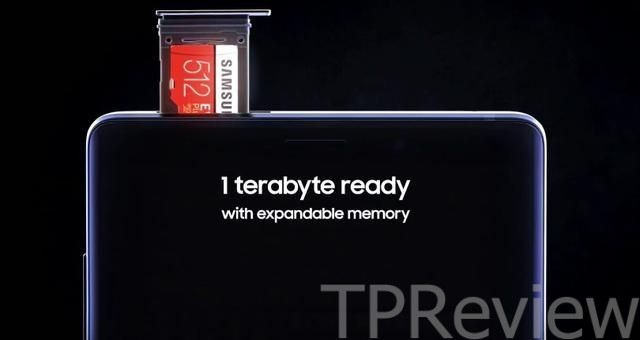 Samsung probably decided to go forward with these cards because Samsung it’s trying hard to make the Galaxy Note 9 seem anything but a Galaxy Note 8 version. Offering customers 1TB of storage on a phone isn’t something many other Android device makers can brag with.

Even if you don’t plan on buying the Note 9 in the coming weeks, the 512GB microSD card should be on your radar, especially if you want more local storage on your Android smartphone. Moreover, the card can be used with a bunch of other devices, including iPhone (with a dongle), and computers (via special adapters).

But wait, there’s one more thing. We have no idea how much Samsung’s 512GB cards will cost, but 128GB and 256GB model retail for $34.99 (for reference at the moment only) and $84.99 (for reference at the moment only) on Amazon right now, respectively. Even if the 512GB option will be more expensive than you’d like at launch, you could still get yourself plenty of Samsung-branded microSD storage for less than it used to cost — there’s also a 256GB Evo Plus card that’s even cheaper than the Evo Select model above.