Best Head-Up Displays For Your Car

First used in military fighter jets, the head-up display (HUD) falls somewhere between a tech feature and a safety feature. The device reduces dangerous distractions by displaying key information, such as a car’s speed and navigation directions, directly in the driver’s line of sight. Some systems project information onto the windshield; others project it on a separate screen.

HUDs are becoming increasingly common in all types of new cars, ranging from the Mazda3 to the BMW 7 Series, but you don’t have to trade in your older model just to get one. Several aftermarket solutions let you modernize your current ride, whether you prefer an affordable device or a high-end product with a price tag to match. To make your decision easier, we’ve singled out some of the best on the market.

You may have the problem that your cellphone might become a deadly distraction on the road. Cell phone usage while driving leads to 1.6 million crashes each year in the US. But they’re also critical when you’re lost in an unknown city or need to answer your boss. Existing GPS and phone mounts try to provide safer solutions, but the driver still has to look away from the road to use them. A split second is all it takes for an accident to occur.

Hudly Wireless head-up display lets you access critical driving info by wirelessly casting it into your line of sight. Cast your smartphone app of choice or navigate with the free Hudly app, optimized for use on a HUD. Connect optional smart modules so car diagnostics like speed, RPMs, and fuel levels can be displayed, featuring crisp imagery in all lighting conditions.

With this Hudly HUD, you can focus on the road ahead and never miss a moment. It is designed to meet the needs of every driver. That being said, you can improve your typical driving routine with optimal routes to work, home, and everywhere; you can keep an eye on speed and RPMs without looking away from the track; you never miss a moment while exploring new highways or enjoying the scenic routes. Furthermore, this Hudly HUD is easy to share between cars to be used on different dashboards.

Upgrade your drive today! And get one Hudly HUD from Amazon. 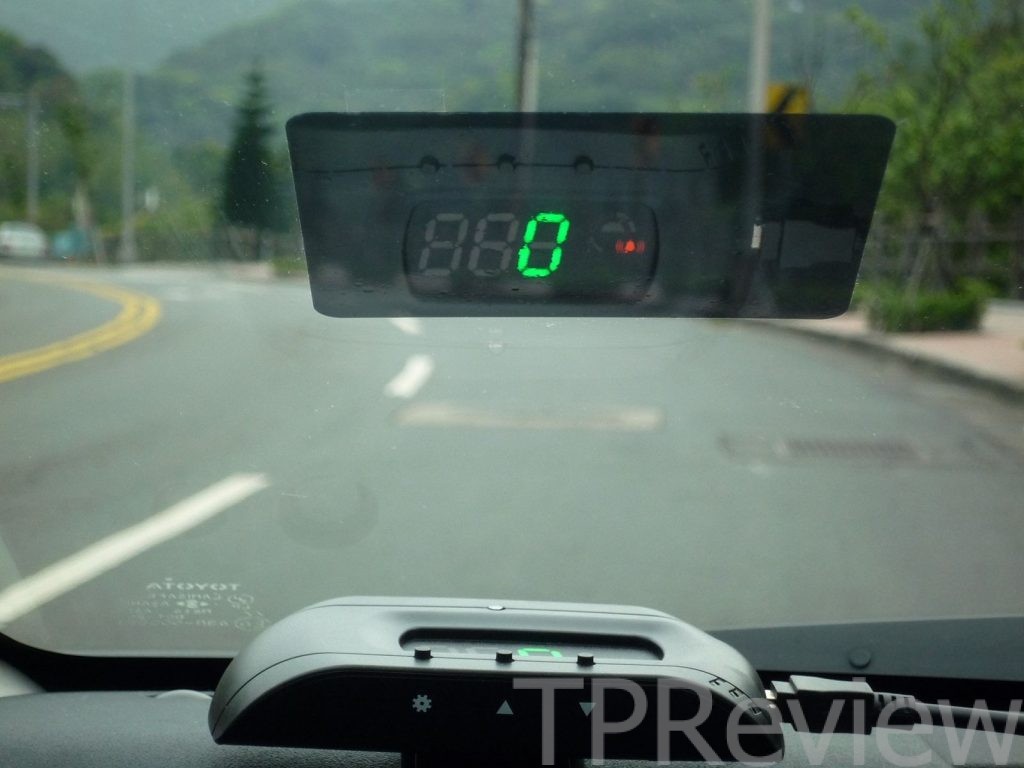 If you want to know how fast you are driving in an easily visible, clear and accurate display, this just fits the bill exactly! Drive safely by never looking down to check speed again with this Head-Up Display Speedometer. You may also set overspeed warning with the touch of a button. When the preset speed limit is exceeded, a visual indicator lights up and an optional alarm beeps (for up to 15 seconds) to remind you of the speed limit. The HUD uses GPS to determine the true speed of the vehicle, so the speed display is spot on accurate. It makes driving the speed limit so much easier. 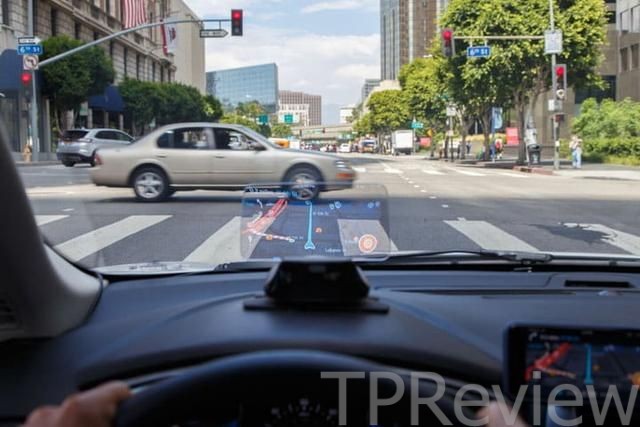 The team at Hudway developed the Cast to offer an affordable alternative to the tech-packed Drive device that should be released in the coming year. Using the Apple AirPlay and Google Cast features, the Hudway Cast literally “casts” your phone screen to the head-up display. This functionality opens the Cast up to near limitless possibilities of app-based projection. The Hudway Cast hands-on review said it “truly looks like a built-in display from a major automotive manufacturer.”

The Cast displays standard information like music, navigation, and phone calls, or additional details like MPG and RPMs if you opt for the OBD II cable accessory. The Cast connects in seconds to the included dash mount and holds tight to your dashboard with the adhesive backing. Patching into the Cast Wi-Fi and initiating the Hudway Cast application is a cinch. From here, you can mirror just about anything from your phone. On the road, the brightness and visibility are excellent. 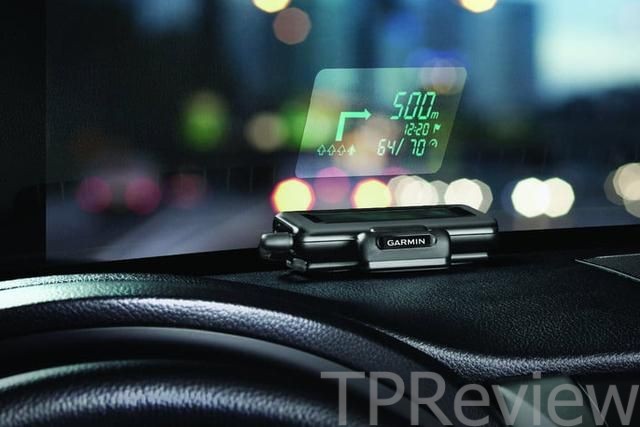 Garmin’s HUD adheres to the motto that simpler is always better. It’s a small, lightweight device that sits on the dashboard and projects information either on a transparent film that needs to be affixed to your windshield or on a reflector lens. The brightness of the display is adjusted automatically.

The device provides turn-by-turn navigation directions, the posted speed limit, and the location of speed cameras, which comes in handy should you try to beat its estimated time of arrival. The unit needs to be paired with a compatible smartphone via Bluetooth, however, and Garmin stresses it only works with StreetPilot for iPhones or Navigon for Android devices. Sadly, Google Maps is not compatible. The Garmin HUD is also relatively compact so it can be moved around from car to car. It’s not as feature-intensive as some of the high-end units (on our list), but it’s built by a trusted name and priced at a reasonable price. 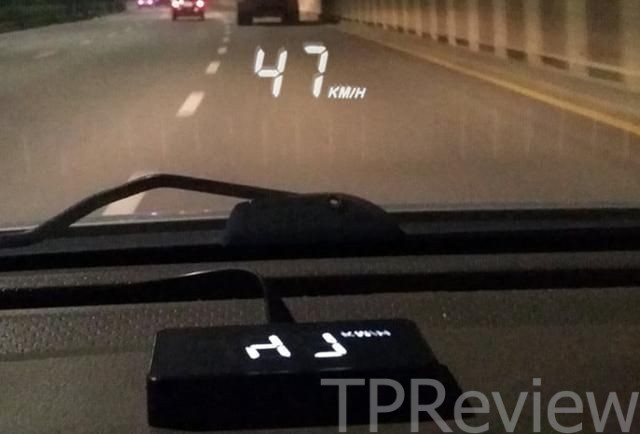 The Sherox HUD is one of the more basic devices on the market. It plugs into the car’s OBD2 port, meaning it is not compatible with older models, and it displays basic information about the car and its surroundings without going too deep into details. It includes a speedometer and a trip meter, as well as information about the voltage and the coolant temperature. The warning lights could help prevent a costly breakdown.

Once it’s set on the dashboard, the Sherox HUD reflects information directly onto the windshield without requiring a reflection film. The company explains its device relies on nano-technology to eliminate double reflections. It turns on as soon as the driver starts the engine, and it shuts off at the same time as the engine, so there is no need to manually turn it on or worry about it draining the battery. It’s not the most feature-intensive HUD (on this list), but it earns points for simplicity and affordability. 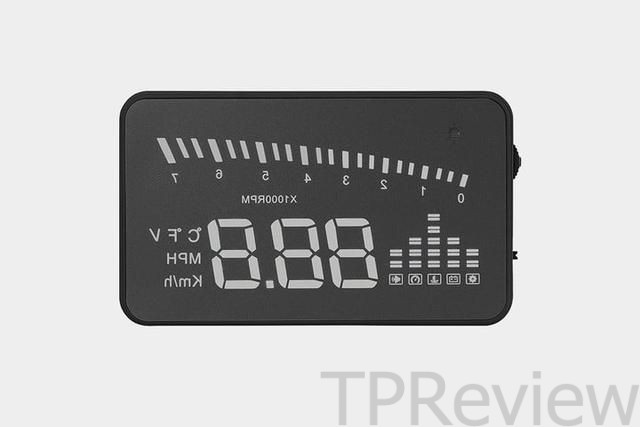 The Arpenkin X5 is one of the cheapest HUDs you can buy new today. It’s a compact, wallet-sized device that projects information directly onto a car’s windshield. It provides the vehicle’s speed, the engine’s revolutions, and it even shows simple digital gauges for the voltage and the temperature, among other parameters. Arpenkin explains the X5 uses nanotechnology to eliminate glare and reflections.

The Arpenkin X5 sits on top of the dashboard, though it needs to be plugged into the car’s OBD2 port. We suggest you check where yours is located before buying; it’s normally under the dash, on either side of the steering wheel, which should be convenient enough. But sometimes it’s under the carpet. The catch is, the Arpenkin is compatible only with American and European cars built after 2004 and Asian cars manufactured since 2007.